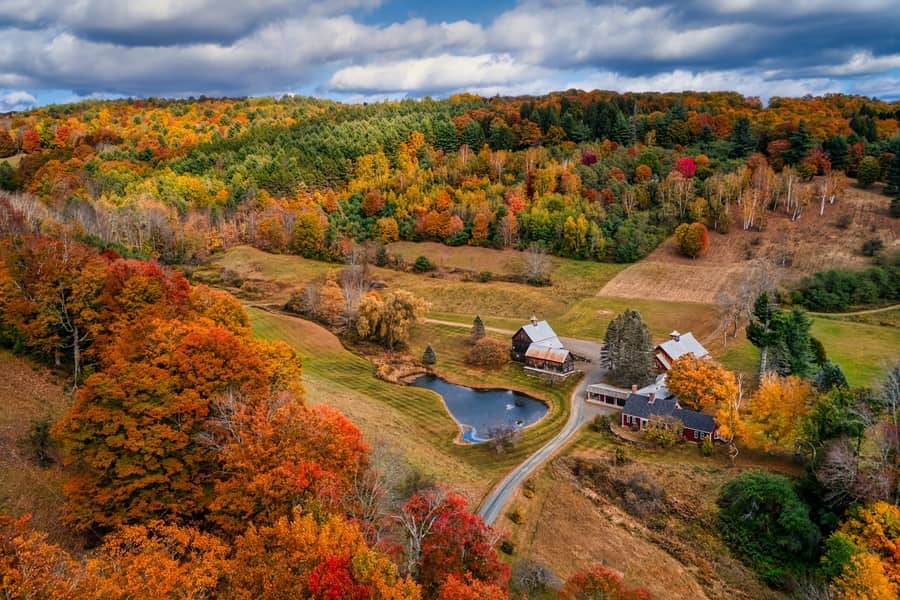 Vermont is the sixth smallest US state with the second-lowest population... there are more cows than people! It’s considered a hippie paradise where you’ll find beautiful landscapes, gorgeous fall foliage, lots of covered bridges, many scenic routes, and no billboards.

The Green Mountain State is home to many farms, fresh produce, breweries, wineries, artisan foods, cheddar cheese, maple syrup, and ice cream! Vermont is the birthplace of Ben & Jerry’s, as well as the very popular Creemee.

You can immediately recognize a Vermonter by their area code— there’s only one! The locals are known to be very community-oriented people who generously help out wherever help is needed. It’s impossible to go out without running into someone you know.

Another characteristic of Vermonters is their superhuman tolerance to the weather, specifically the freezing winters. The state has unpredictable weather and just like anywhere else, is prone to several natural disasters.

What natural disasters does Vermont have?

Between 1953 and 2019, Vermont declared 47 major disasters, of which severe storms and floods happened the most according to the Federal Emergency Management Agency (FEMA).

Vermont experiences intense storms in the form of severe thunderstorms and lightning, prolonged heavy rains, large hail, and strong gusty winds. While they can occur any time of year, they’re most common during the spring and summer months.

The Green Mountain State gets approximately 150 days of annual precipitation of 0.01 inches or more. This is more than the national average.

The damages caused by these storms include flooding, power outages as a result of damage to utility lines, disruptions to telecommunication services and transportation, property and infrastructural damage, and sometimes severe injury or loss of life.

Wind storms in the state are sometimes confused with tornadoes but there’s a key difference to distinguish one from the other. Tornadoes are rotating storms but the wind events in Vermont are straight-line, typically flowing from west to east.

The wind is the strongest on mountain peaks. In any case, the severity of these storms can be as bad as strong tornadoes.

Severe storms don’t generally last too long. When a storm is forecasted, find safety inside a sturdy building and wait there until the storm passes. In this guide, you will find many safety and mitigation tips to help you become prepared.

Many streams and river channels criss-cross the state and make Vermont highly susceptible to river floods and flash flooding. These are some of the worst natural disasters to affect the state.

These floods are primarily caused by periods of heavy rain, quick thaws, rapid snowmelt, and overly-saturated soil that becomes too soggy and therefore unable to absorb water.

The Green Mountain State has experienced several significant floods. The two most notable ones are:

Floods and fierce flash floods leave behind a lot of destruction, including the contamination of water and crops, damage to transportation and infrastructure, and major impacts on the local and state economy.

The University of Vermont predicts that over the next century, property damages resulting from floods will exceed $5.2 billion.

Residents are urged to become prepared for the challenges that future floods present. If your home is at any risk of flooding now, it likely will at some point. Consider looking into the National Flood Insurance Program to see what options are available to you.

In this guide, you can learn mitigation strategies to lessen the impacts on your home specifically, as well as tips on how to stay safe amid a flood event.

Due to Vermont’s location, it’s no surprise that this is one of the coldest states in the US. The winter months are long and cold, particularly in December and January. The state has over 170 days a year where the average nighttime low temperatures fall below freezing.

The Green Mountain State is vulnerable to ice storms, blizzards, and heavy snow. They receive over 86 inches of snow annually, which is nearly three times more than the national average. Snow accumulation is higher in the upper elevations. For instance, Jay Peak gets the most snow in the Northwest with an average of 350 inches per year!

One of the worst snowstorms in the state was the Great Blizzard of 1888. More than 40 inches of snow fell over two days along with 40mph gale-force winds and temperatures hovering below 6°F.

Many cities were buried under the snow and remained unreachable to the outside world. The only way to get around was through the tunnels that were dug into the mountains of snow. Ten Northwestern states were affected by this storm and around 400 people died as a result.

No matter where you are in Vermont, consider yourself to be in a snow-prone zone. Consider the challenges these winter storms present, including hazardous travel conditions, power outages due to the weight of snow and ice on trees and power lines, and property damage from the wind.

In this guide, we list helpful mitigation strategies and safety tips to consider during a snow storm. A free printable checklist is provided at the end in case you want to keep it for future reference.

Even though Vermont is not a coastal state, it does not mean that they’re out of reach of Atlantic storms. Hurricanes and nor’easters that reach the state as category 1 or tropical storm levels have the potential to cause major devastation.

Tropical Storm Irene is a prime example of this. As before mentioned, this storm transitioned into an extratropical cyclone and dumped 11 inches of rain in Vermont alone. It flooded more than 2,400 roads, and destroyed 800 homes and businesses, 300 bridges, and half a dozen railroad lines. One town specifically, Brandon, was devastated by flash floods.

In an interview during the 10 year mark since Irene, Brandon business owner Sheila Gearwar, from Brandon House of Pizza, recalled, "The building was bouncing, literally bouncing, because of the water and the trees hitting the bottom of the building." She explained at the sight of her building being moved by floodwaters. "Irene brought out the best in Vermonters. We're fighters. We make it through everything."

Today, the pizza shop is thriving but is no longer located at its former location.

The storm cut off more than 13 towns and left them as veritable islands as a result of collapsed bridges and rising waters. Essex and Grand Isle counties were declared federal disaster areas. All in all, the Green Mountain State suffered $733 million (2011 USD) in damages.

To stay safe and healthy during a tropical storm or hurricane, you should have a preparedness plan. Your plan should include a fully-stocked emergency kit (food, water, first aid, etc) an evacuation plan, and a shelter-at-home plan.

If you’re planning to evacuate, know which alternative routes are available to you, considering heavy traffic or flooding may have blocked some of the roads you’re used to driving on.

In this guide, we go into the details of hurricane preparedness, but if you’re ready to kick your preparedness plan up a notch, check out our complete guide to building a (customizable) family emergency plan here.

Vermont has 67 mountains and peaks, making it a state with high susceptibility and moderate incidence to landslides, rockfalls, and erosion.

One of the worst landslides in recent years was the Cotton Brook Landslide in Waterbury that occurred in May 2019. Around 250,000 cubic meters of material were displaced onto Cotton Brook Road, and as a result, wiped out Fosters Trail. Rehabilitation projects have begun to stabilize and strengthen the area.

The first step in preparing for a landslide is to identify your risk by looking at hazard maps of your area. If your community is near mountainous terrain,  The Vermont Geological Survey is implementing landslide hazard mapping protocols to locate areas of potential slope failure.

Once you know your risk, you can implement mitigation strategies like the ones listed in this guide.

Our electrical systems are highly vulnerable to weather and manmade events, so when preparing for a natural disaster in Vermont, you should also be preparing for a power outage.

The Green Mountain State experiences an average of 6 to 8 hours of outages annually. The primary reason is the combination of dense forests, heavy snowfall, and broken tree limbs.

One of the worst outages in the state’s history was the Northeast Blackout that occurred on November 9, 1965. Although the cause was liked to be human error, the outage nevertheless left 30 million people in the Northeastern US in the dark— some for as long as 13 hours!

A short power outage may not sound like a hassle to most, but the longer it lasts, the more problematic it can become. To have a solid preparedness plan, you should have ways to prepare meals, flush your toilet, practice hygiene, and keep small appliances charged without electricity.

Earthquakes are not very common in Vermont but there’s a moderate risk. The state experiences earthquakes with epicenters in other states or Canada, as well as cryoseisms (frost quakes) due to the shallow ground cracking from rapid freezing activity.

The strongest earthquake with an epicenter in the state occurred on March 31, 1953, near Brandon and Rutland. It had a magnitude of 4.0 and caused some objects to fall and furniture to move. Most of the earthquakes felt in the state cause little to no damage, but precautions should still be taken.

Earthquakes happen suddenly. No matter how much we prepare, it can still be scary to experience one but the truth is that being prepared gives you much more peace of mind. Not just that, but you’re more likely to stay safe because you already know where to take cover and your emergency kits have what you need.

Check out this guide to learn how to prepare for earthquakes, how to mitigate damage, and how to stay safe during and after.

Wildfires are likely to occur in Vermont, just like any other forested place, however, they’re not too common. About 1,000 acres burn annually and luckily these numbers haven’t increased much over the last decade.

If there’s one region of focus, it would be the northeastern part since there are more softwood conifers in that area.

Tornadoes in the Green Mountain State are very rare. In an average year, there might be just one EF0 or EF1 tornado.

Vermont experiences occasional periods of drought and heat waves. One of the longest periods of drought in the state lasted for 71 weeks, starting on June 23, 2020, and ending on October 26, 2021. As of the writing of this article, there are no drought conditions present.

I hope you enjoyed learning about the disasters that affect Vermont.