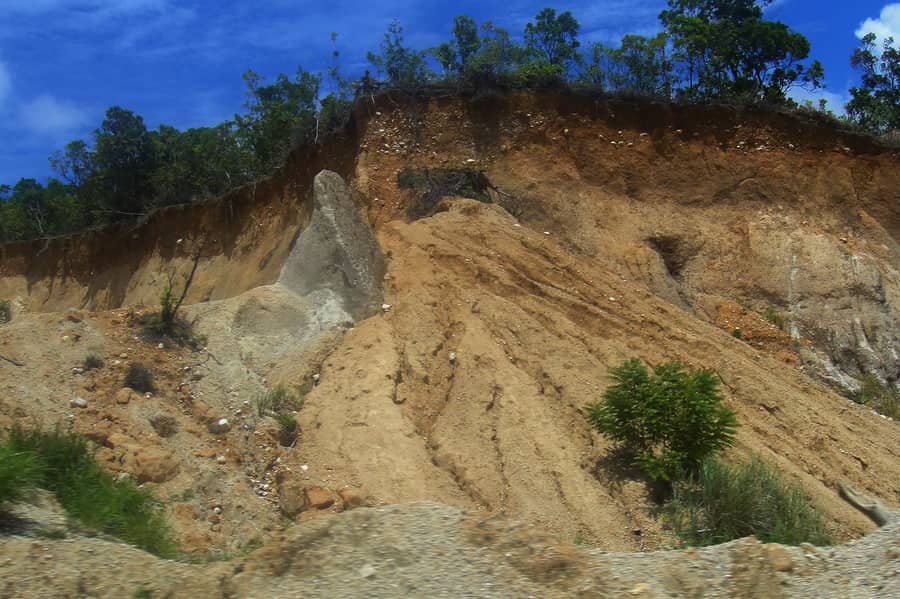 Landslides are one of the disasters that make the least amount of headlines, yet are surprisingly common and highly destructive.

I’m sure most of the world found out about the Montecito mudslide that occurred in the northwest of Los Angeles in 2018. But did you hear about all the other 100+ landslides in 2019 that made it a record-breaking year in terms of fatalities?

If you didn’t, I urge you to read through this page and check if your city and home are located in high-risk areas. Unfortunately, many people don’t know they are until the moment a slide happens.

Perhaps I sound a little dramatic? Maybe! But if most people understood their risk, you'd probably understand why.

Why is a landslide dangerous?

Landslides can travel long distances at fast speeds and sweep or bury anything along their path, including infrastructure, people, and even entire cities. They’re difficult to predict because they behave like something that breaks under pressure. In a moment’s notice, the layer of clay or dirt right beneath the surface of the Earth may give way to the pressure that is accumulating above it. From then on, you’re at nature’s mercy.

Luckily, Australian researchers have developed a technology that uses mathematics and Artificial Intelligence to predict landslides weeks in advance. The terrain, the environment, and the evidence of previous landslides offer great insight into the hazards of a region and the probability of a landslide occurring in the future. The problem with this new technology is that it will take a very long time to implement it world-wide.

So, for the time being, your time would be better spent prioritizing your safety and your home’s stability, rather than the arrival of an early-detection device warning you of a possible threat.

In this guide, you will learn how to prepare your family and your property for this type of disaster.

[This is a long article about landslide preparedness, so the links in the Table of Contents may help you to navigate through the page. If you don't have much time and want to dive right into the meat of this article, please click here.]

Landslide - This is the general term for the slipping of rock, dirt, mud, or snow from a cliff or mountain. There are many causes for landslides so we’ve discussed them below.

Mudslide - As the name suggests, a mud slide is when a large amount of mud dirt has slipped down a slope.

Mudflow (or) Debris Flow - This term describes a more “flowy” version of a mudslide. A mudflow is a lot more liquid-based than a mudslide. It travels extremely fast making them especially dangerous. Imagine an avalanche made of mud- that’s a mudflow.

Rockfall - A rockfall refers to the abrupt collapse of a rock near a steep mountainside or cliff.

Rockslide - Now imagine an avalanche made of rock- that’s a rockslide. Rockslides occur when there’s rock failure near a slope or cliff.

Avalanche - An avalanche is a landslide composed of snow, ice, and rocks.

Lahar Flow - Lahar is the same as a mudslide except that contains volcanic materials. Lahar flows from the crevices and steep terrains of volcanos.

More information on types of landslides can be found here.

NASA has a map called the Precipitation and Applications Viewer. It shows you the accumulation of rainfall in any given region. Select your area from the dropdown menu and click on “load data.” Then, it will show you a variety of colors that can be understood by the legend. If you don’t see it, click on “show legend” below the map. This map is updated often by satellite. It provides you with a rough idea of how much rainfall is expected, and if there’s a chance of landslides or not.

You should not use this map as your only way of determining your risk, however. Instead, listen to the NOAA Weather Radio for up-to-date information.

The USGS released a map called the US Landslide Inventory. This is an interactive map that highlights areas that may be at risk of future landslides. It categorizes the probably of such an event in different colors, and lets you search for specific locations with their address and coordinates feature.

What to expect during a landslide

What causes a landslide?

Landslides can be caused by a combination of different factors.

In its simplest terms, a landslide occurs when the lower layer of soil loses its ability to withstand the pressure of anything lying above it. You can expect it to give way with force, and depending on the soil, the Earth might only slip a short distance or it can travel up to a few miles. Some cases are more tragic than others due to the moisture level and other conditions of the soil, but in any case, you should always be prepared for the worst-case scenario.

Most landslides are triggered by either natural or manmade disasters.

Several manmade disasters can cause a landslide, such as:

Geological processes and natural disasters that trigger landslides include the following:

When is landslide season?

There’s no such thing as a landslide season because they can occur at any time. The most common time of the year, however, is during episodes of heavy rainfall and winter. Depending on where you live, your risk could be higher in the summer especially during monsoon, tropical storms, and hurricane season and/or during the winter season.

Where do landslides occur?

Landslides can occur throughout the United States in mountainous, hilly and coastal regions as well as near river valleys. The regions that are more susceptible are the ones that receive large amounts of water (rain/ snow) and have harsher climates.

The states most prone to landslides are California, Oregon, Washington, Alaska, and Hawaii, as well as the regions near the Mississippi River, the Appalachian Mountains, the Rocky Mountains, the Cascades volcanic region, and the Pacific Coastal Ranges.

Can landslides be predicted?

Landslide-prone locations can somewhat be predicted but the timing of them cannot. One of the main ways that they can be forecasted, is by looking at the regions where they already occurred in the past. Areas that have already experienced slips will likely experience them again in a future time.

Researchers study preexisting landslides to examine the factors that made them collapse. Some of the factors include (but are not limited to) the following:

It’s important to keep in mind that our landscapes are constantly evolving, so landslides can essentially occur anywhere if the environment allows for it.

How do you know if a landslide is coming?

Although their timing is highly unpredictable, there are a few ways you can look out for an approaching landslide. If a landslide is happening and flowing in your direction, you may hear the movement of rocks, cracking trees, and debris colliding against each other. The noise will increase and become louder the closer it gets to you.

You should be extra cautious in high-risk areas. Remember which locations are prone to slips and note any significant weather, such as abundant rain or snowfall in an area that is very hilly.

What type of damage can a landslide cause?

Landslides are known for causing extensive destruction. Some are more devastating than others, of course, but they typically cause major damage to infrastructure. As rocks, mud, or debris flow downhill, they have the potential to bury anything along their path including homes, vehicles, bridges, roads, and buildings. They can cause major damage to a city’s water systems, sewage systems, power lines, nearby lakes, rivers, and wildlife.

Landslides change the topography and ecosystem of a region and in some cases, they can cause flash floods or tsunamis.

Can a landslide kill you?

Yes, they can. Unfortunately many people have lost their lives to landslides or related disasters. The year 2019 was a record-breaking year in terms of fatalities. Approximately 100 fatal landslides were recorded, which accounted for the lives of 358 people.

How to mitigate landslides

Although unpredictable like most other disasters, landslides are a unique type of disaster because they can be triggered by so many different factors, as we discussed above. Landslides occur with little to no warning, so don’t expect the local officials to issue an evacuation notice in advance.

My main safety tip is to become aware and stay alert of any possible risks. I urge you to take extra precautions before, during, and after large rainstorms or snowstorms especially if you live in a high-risk zone and/or your region has been affected by a wildfire within the last 3 years.

With that said, let’s discuss some of the important safety measures you should take before, during, and after a landslide.

Stocking up on food. water, and other preparedness items is necessary for any disaster but when thinking about landslides, I think it’s especially beneficial for those who live in landslide-prone regions with limited options for obtaining supplies. Let me explain.

I live in a small resort town where there are only three access roads to come and go. If any of those roads experience a landslide (and each of them have, by the way!) then that road gets cut off until the repairs are made. There have been times where two of the roads were blocked by debris flow, and on occasion, entire sections of the roads were washed away. More often than not, roads are closed for weeks if not months. This makes it very difficult for grocery and supply trucks to make their deliveries to our town.

Can you relate to my situation? If so, make sure to have plenty of supplies to sustain you and your family for a minimum of 14 days. Some of the supplies I recommend are the following:

I hope I didn’t I bury you in too much information. If you feel overwhelmed, however, I made a handy checklist that you can print and keep with your emergency kit. This checklist highlights important safety tips to remember before, during, and after landslides, as well as the top items you should keep in your preparedness bag.

Get your landslide checklist here!

Hey, before you go- don’t let this post slide past you without sharing it first!

Spread the word about the importance of becoming prepared for landslides.

What was the biggest landslide in the world? — USGS
What should I know about wildfires and debris flow? — USGS
Deadliest Landslides in Recorded History — World Atlas
Five Years Later - The OSO (SR 530) Landslide in Washington — USGS
11 Facts about Landslides — DoSomething
Mount St. Helens Eruption: Facts & Information — Live Science
Mt. St. Helens’ Victims Remembered — LA Times
What States Are Prone to Landslides — NBC News
Landslides - Where, When, and Why do They Occur? — Geology Cafe
Rising number of fatal landslides makes 2019 the worst year on record — The Watchers
New Software Can Predict Landslides Weeks Before They Happen — Smithsonian Magazine 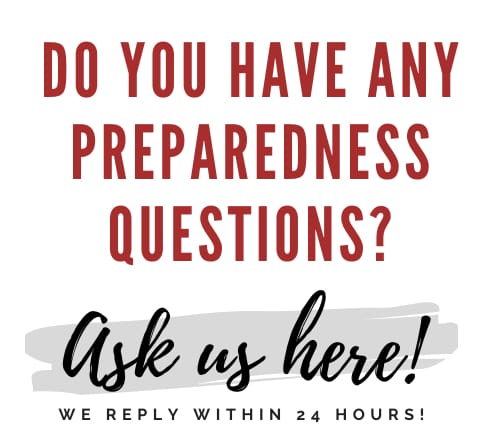