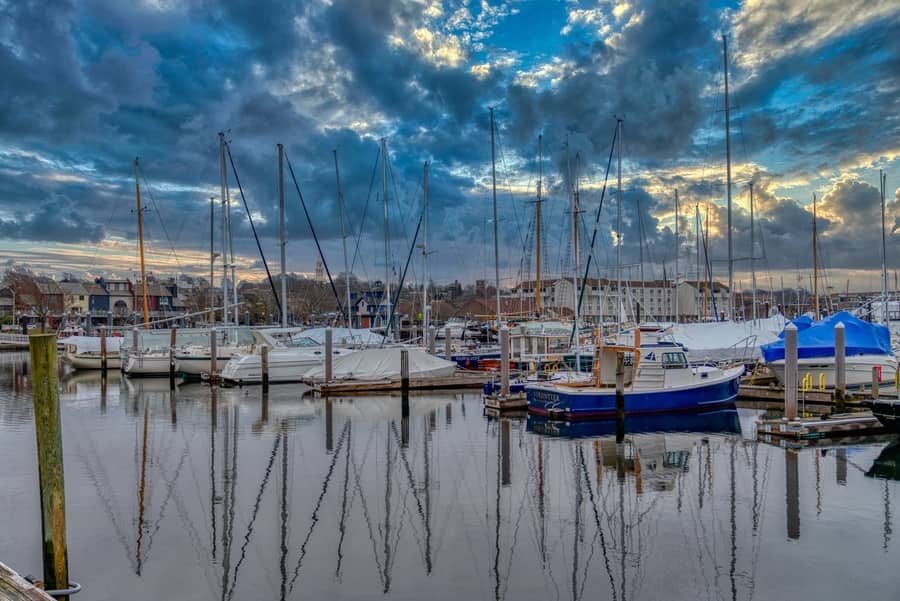 Rhode Island is the smallest state in the US. Everything is within an hour’s driving distance! In the Ocean State, you’ll discover miles of stunning coastal views, four major islands, and some of the best fall foliage drives in the country.

Rhode Island has a rich history. Many of its buildings date back to the 17th and 18th centuries. The oldest tavern in America, the White Horse Tavern, is also located there. It is believed to have been established in 1673, more than a hundred years before America’s independence.

Ironically enough, a state of such a small size is also known for its mansions, the most famous of them being the Breakers (the 70-room Vanderbilt family mansion).

The Ocean State is a hidden treasure. Its incredible food, vibrant art scenes, walkable and bike-able towns, and tight-knit communities make it a place where the locals are likely to stay for life.

As is the case with all the other US states, natural disasters are a threat. In this article, we’ll discuss the ones that are more likely to occur and how to become prepared.

What natural disasters does Rhode Island have?

Between 1953 and 2019, Rhode Island declared 22 major disasters, of which hurricanes and winter storms happened the most according to the Federal Emergency Management Agency (FEMA).

Despite it being the smallest state in the US, Rhode Island boasts 400 miles of coastline along the East Coast. This, in turn, makes it a state prone to tropical storms, hurricanes, and nor’easters.

The state of Rhode Island has experienced its fair share of coastal storms, such as:

Hurricane preparedness planning should be done well in advance of any forecasted storm. More often than not, stores will run out of all supplies the moment a tropical storm or hurricane makes headlines, so don’t be caught unprepared!

In this guide, you’ll find a list of suggestions that may help to mitigate structural damage done to coastal properties. You will also read about which emergency supplies we recommend you have in your kits.

Be sure to download the safety checklists (found at the end of the article) and keep a printed copy in your kit!

The western third of the state gets the bulk of the snowfall totals (between 40 to 55 inches), whereas Block Island and the southeastern shores of Narragansett Bay receive much less (an average of 20 inches). These averages can vary depending on how much precipitation occurs during that winter.

One of the worst winter storms in the Ocean State was the Blizzard of February 1978. This storm lasted only 33 hours and brought with it hurricane-force winds of more than 85 mph (plus gusts of 110 mph), as well as the most snowfall in Rhode Island’s recorded history.

The city of Providence was buried in over 27 inches of snow, while other cities like Woonsocket received up to 38 inches. This storm caused power outages and a four-day standstill. Twenty-six Rhode Islanders lost their lives as a result.

It’s super important to become prepared for the winter season. If you commute, you should have an emergency kit with plenty of supplies if you become stranded on the road.

In your house, you should keep enough supplies to keep yourself and your family warm and well-fed for several days in case a major storm makes it impossible to leave your home.

Consider the likelihood of power outages and prepare for them as well. Read our complete winter preparedness guide here!

Severe storms are possible in Rhode Island, much like anywhere else in the United States. These storms can occur in the form of strong gusty winds, hail, heavy rainfall, thunder, and lightning. They can produce flood damage and on rare occasion tornadoes.

These events are most common in the spring and summer months during the afternoon and evening hours but can occur any time of year during any time of day if the conditions are right.

In 2019, the Ocean State averaged an overall 19,000 lightning strikes. The good news is that it ranks among the lowest in the US for lightning-related deaths.

Due to the state’s climate, there’s a very rare chance of tornadoes. Its only recorded multi-tornado day occurred in August 1986 with the strongest one being an F2 tornado. Damages reached the millions, but there were no fatalities.

Becoming prepared for severe storms is important no matter where you live in the state. Before a storm is forecasted, be sure you have enough emergency provisions at home, including potable water, long-term food storage, a means to prepare it that doesn’t require electricity, and first aid supplies.

During times of bad weather, you should stay tuned to the local news for real-time updates. Take shelter inside a secure building away from exterior windows until the storm has passed.

For our complete guide on severe storm prep, click here and remember to print the free checklist at the end!

Rhode Island is prone to flooding, particularly in the cities along the coast and near major rivers. The most vulnerable communities are Newport, Providence, Cranston, and Warwick.

One of the main concerns in the Ocean State is the fact that many buildings are not built above the current flood zone levels because they’re old. Even though these buildings withstood natural disasters in the past, they’re more likely to become damaged in the future.

There’s a higher risk of flooding in older buildings because most are not elevated above the flood line, and a higher chance of damage due to the lack of infrastructural technology that has been implemented in the construction of modern buildings.

The worst disaster in the state’s recent history with respect to flooding occurred in 2010 after two months of unprecedented rainfall that kept rivers way above the crest levels. Transportation halted throughout the state as a result of flooded roads, highways, and train tracks.

It’s crucial to become prepared for a flood. The best place to start is by determining your local risk. Look at regional flood maps to see the threat level in your community.

Also, we recommend learning about  evacuation routes in your area in case of the roads you commonly use becomes flooded. Practice evacuation drills with another family member.

In this guide, you can learn how to prepare before a flood and how to stay safe in the midst of one.

In the event of a flood, get to high ground immediately and do not attempt to cross flood waters.

Natural and manmade disasters can quickly and easily disrupt our vulnerable electrical systems. Power outages are oftentimes the consequences of extreme weather in the Ocean State.

One of the state’s worst outages happened in August 2011 during Tropical Storm Irene (downgraded from a hurricane). Almost 300,000 Rhode Islanders were left in the dark for several days.

More recently, in November 2021, over 8,000 Rhode Islanders lost power during a severe and fast-moving thunderstorm.

When preparing for any natural disaster, always prepare for the possibility that a power outage may accompany it. Your emergency kit should have the essentials, like food and water, but also a method of cooking your meals that doesn’t require electricity, such as a stove and fuel kit.

In this guide, you can find a list of recommended items that should go in your kit, as well as safety tips to consider during power outages.

Rhode Island is not necessarily prone to earthquakes but they do occur. The southern region has experienced sporadic shakers, but they’re typically small to moderate in magnitude.

Providence sits at the northernmost part of Narragansett Bay, which is a series of river valleys that lie above a system of faults.

The strongest quake recorded in the Ocean State occurred on September 3, 1978. Its epicenter was four miles east of Narragansett Piet and it had a magnitude of 4.7.

Landslides can occur anywhere where there are slopes, mountains, and steep hillsides. Rhode Island has several cliffs with 70-foot drops and its highest peak, Jerimoth Hill, reaches 812 feet. Even so, the risk is minimal.

Submarine landslides have been observed, sometimes triggering tsunami warnings, but no significant damage has been reported as a result.

There’s a minimal risk of tsunamis along the coast of Rhode Island. In 2013, a small tsunami was recorded in Newport but it was small, only reaching a foot above sea level.

Almost 60% of the Ocean State is covered in forests. Although small wildfires have occurred and are possible to occur again, the risk is generally low.

Like all other states, Rhode Island is prone to several types of natural disasters.

Luckily, there are many resources available to you to help you become equipped to face and overcome them.

I hope you enjoyed learning about Rhode Island disasters.

We created an in-depth resource with disaster preparedness guides, templates, and checklists that will allow you to customize your emergency plan according to your specific needs. Click here to get started!