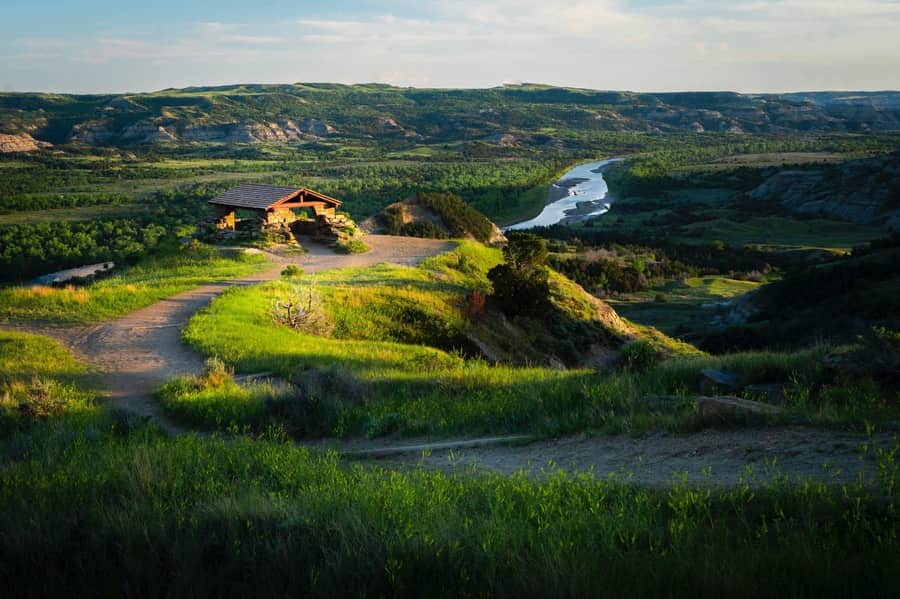 North Dakota was admitted to the union in 1889. Its name was derived from the Sioux word “Dakota” which translates to “friendly” or “ally”.

North Dakota definitely lives up to its name and is nicknamed the Peace Garden State. One of its main attractions is the International Peace Garden, which is a beautiful park located between the North Dakota and Canadian borders. It was built as a representation of a pledge made in 1932 between the United States and Canada in which both countries agreed to never go to war against one another.

The Peace Garden State is one of the least densely populated states in the nation. In fact, cows outnumber people by three times! Its smallest city, Maza, had a population of 5 during the 2020 census.

The state is a major producer of crops, particularly wheat, dry legumes, flaxseed, canola, honey, sugar, and sunflowers. Over 90% of its territory, approximately 39.1 million acres, is covered in farmland and ranches. Not even 1% is forest land.

Even though North Dakota is the least-visited state in the US, it’s known as the state where explorers Lewis and Clark spent most of their time during their journey. It’s also where President Theodore Roosevelt lived as a rancher.

North Dakota is famous for its scenic beauty and natural wildlife. The state is covered in grasslands, rivers, hills, valleys, lakes, wetlands, and Badlands. It’s home to 63 wildlife refuges, which is more than any other state in the nation.

It has a continental climate where you can expect short, hot summers and long, harsh winters— occasionally year-round cold and snow. The weather is colder in the northeast than in the southwest but natural disasters are experienced state-wide nonetheless.

What natural disasters does North Dakota have?

Between 1953 and 2019, North Dakota declared 59 major disasters, of which floods and severe storms happened the most according to the Federal Emergency Management Agency (FEMA).

Floods are common along the rivers of North Dakota. The peak season is during the spring and summer months because of the heavy rain during thunderstorms and the warming temperatures which melt the snow quickly.

Meanwhile, the soil surrounding the rivers is already saturated and beginning to thaw, thereby causing the river to swell, jam (with ice), and overflow.

The Missouri River, the Red River, Devils Lake, and many other bodies of water are known to flood statewide.

North Dakota has experienced many significant floods, including:

North Dakota’s most populous regions, such as Grand Forks, Bismarck, and Fargo, are located near major rivers.

It’s important for North Dakotans to have a mitigation, preparedness, and evacuation plan and rehearse it on a regular basis.

When it comes to floods specifically, identify a safe meeting place for your family in case you need to get to higher ground at a moment's notice. Our flood prep guide discusses this in greater detail.

Thunderstorms cause the Peace Garden State the most devastation (in terms of property and crops), financial loss, and injuries than any other disaster. These storms cost the state millions of dollars each year.

North Dakota experiences an average of 19 to 35 thunderstorm days a year, depending on the region, and about 13 windstorm days a year. Statistically, almost three-fourths of all thunderstorms occur between June and August, with July being the peak month.

Nearly 96% of windstorms occurred between March and September, with June being the peak month. The peak time for severe thunderstorms was between the hours of the late afternoon and the early morning.

These are some interesting storm statistics for North Dakota:

Severe storms are powerful and dangerous. Lightning can strike several miles outside of the area of the storm, so be prepared to go indoors as soon as a storm is approaching your area.

Most storms in North Dakota have a duration of 23.6 minutes so be patient and resume any outdoor activities once the storm has passed.

It's crucial to become prepared a storm occurs and identify the safest place to go in the event of a severe thunderstorm watch or warning. You can learn more about storm preparedness here!

History serves to teach us that what has happened in the past, can and possibly will happen again in the future. For that reason, we know that North Dakota is vulnerable to significant damage as a result of powerful winter storms and it is thereby crucial to be prepared.

Our guide on winter storm preparedness has important information on mitigating the effects of the storm, as well as staying safe in the event of long-term or rolling power outages during freezing temperatures. Learn more here!

Depending on the levels of drought, it’s not uncommon for wildfires to spark up around other times of the year, and for the size and intensity of the fires to be greater than during non-drought years. Limited moisture was the reason why 2021 saw over 100,000 total acres burned— that is six times the annual average!

The cause of wildfires in the Peace Garden State is linked to human activity 90% of the time. The good news is that each person can make a difference.

For example, do not burn debris during peak fire or drought seasons, do not park vehicles or farm equipment near dry brush, and report smoke sightings to the fire department as soon as possible.

In this guide, you can learn how to protect your home from wildfires and how to evacuate quickly should your community become threatened.

North Dakota has a warm summer climate with average high temperatures of 73°F in the south and 67°F in the north. Occasionally you can expect 90°F weather as well, but there are usually no more than 10 days of extreme heat per year.

Eastern North Dakota has a humid continental climate with some periods of excessive moisture, whereas the western half of the state is semi-arid.

In any case, an estimated 20,000 North Dakotans are vulnerable to high temperatures. One of the deadliest heat waves on record happened during the summer of 1936 when up to 5,000 people died throughout North America. During that same heat wave, on July 6th, Steele, ND reached 121°F, its highest temperature ever.

As of the writing of this article, nearly 12% of the state is faced with exceptional drought, 40% with extreme drought, 40% with severe drought, and the remainder 8% with moderate drought. During times like these, it’s essential to conserve water as much as possible.

Some sources suggest that the Peace Garden State will see an increase of up to 50 days of extreme heat by 2050 and may see more prolonged periods of drought.

In order to become prepared, be sure to know the symptoms of heat-related illness. This guide has helpful mitigation strategies and safety tips to consider.

The boundaries of Tornado Alley are not clearly defined, but on some occasions, North Dakota is included within it. An average of 23 tornadoes happen in the state each year.

It was on the ground for 21 minutes and sometimes moved with wind speeds as slow as 10 mph, thereby making the destruction even worse. Some homes were swept off of their foundations, 329 were completely destroyed, and 1,035 were significantly damaged.

It’s crucial to be prepared for a tornado. Our guide has important suggestions on what to include in your storm shelter, what tornado warnings mean, and when it’s time to take cover. Learn more here!

North Dakota is not too mountainous, however certain areas, like the western half of the state, are susceptible to landslides.

The regions most affected are hilly landscapes and slopes, badlands, buttes, soft surfaces where the sediment or rocks that lie above it make the ground unstable, ground that is covered in desiccation cracks, and steep river valleys.

The most common types of landslides in the Peace Garden State are rotational slumps. As of 2021, geologists have mapped out 25% of the state— that is, about 11 million acres— and have discovered 11,077 landslides that affected approximately 116,500 acres. The majority of these landslides have only covered about 10 acres, however, the largest one so far was found in the Little Missouri River Valley and it covered 1,724 acres.

One of the worst years for landslide activity in North Dakota was 2011. At least five major highways were affected and several townships experienced damages.

In order to be prepared for a landslide, you should determine your home and community’s level of risk. If there’s some threat to your home, be sure to reinforce hilly areas and slopes.

If your community is at some sort of risk, identify at least one or two alternative routes of transportation. For more tips and ideas, check out this guide.

There are many things that can cause a power outage, including severe weather and human error. Regardless of where you live, there’s always a risk of a long-term or rolling power outage.

This was the case during the Texas Ice Storm of February 2021. Even though Texas and North Dakota are more than 1,000 miles apart, more than 7,000 homes in the Peace Garden State experienced rolling outages in hopes of protecting the power grid in Texas.

This goes to show that extreme temperatures can have a nationwide impact on our power grids.

Earthquakes are rare in North Dakota but they’re known to happen about once every decade. There are no seismographs in the state because it’s generally stable, however, don’t be surprised if you ever feel a small shaker. The state has experienced 13 quakes in recorded history, of which the majority had a maximum magnitude of 3.7.

North Dakota is inevitably at risk of several natural disasters and the impact of emergencies cannot be underestimated.

Luckily, there are plenty of resources to help you in your emergency preparedness efforts.

I hope you enjoyed learning about natural disasters in the beautiful state of North Dakota.