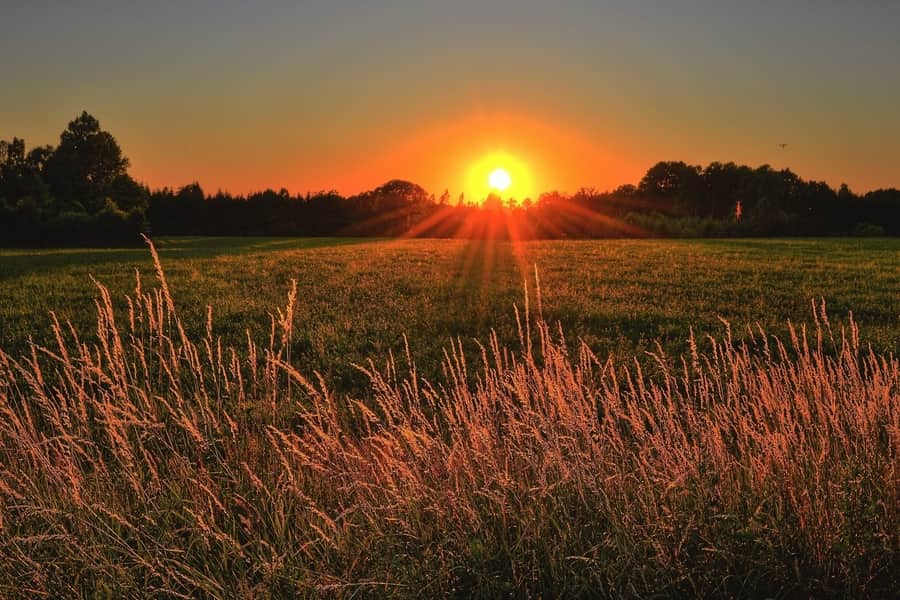 Nebraska was the 37th state to join the union. It is popularly known as the Cornhusker State because it’s the third-largest producer of corn in the nation. Nebraska was named after the Otoe Indian word “Ni Brathge” or “Nibthaska” which translates to “flat water”. The name was a reference to the Platte River which traverses the state from west to east.

Nebraska is located in the Great Plains and is one of the least densely populated areas in the United States. Most of the population lives in rural communities.

The Cornhusker State is not just famous for its corn, but also for the following:

Nebraska’s topography is mostly flat with some canyons, valleys, badlands, and 20,000 square miles of sand dunes. It’s climate has four distinct seasons, including cold, snowy winters and hot, somewhat humid summers. Just like the rest of the nation, the state is prone to several types of natural disasters.

What natural disasters does Nebraska have?

Between 1953 and 2019, Nebraska declared 66 major disasters, of which severe storms and floods happened the most according to FEMA.

In terms of precipitation, Nebraska receives an average of about 25” of rain annually, however, the east receives a bit more and the west and panhandle receive about half of the average.

Thunderstorm season in Nebraska begins in late spring, with a peak in April. May through September see frequent heavy rainfall, with June being the rainiest month and July following closely behind.

Thunderstorms are always accompanied by lightning, and Nebraska ranks as one of the top US states in terms of lightning. The average of cloud-to-ground lightning strikes in the state is 773,000 per year, however in 2019, there were 6,166,000 lightning strikes!

The Cornhusker State is located in what is known as Hail Alley. On average, the state experiences between 7 and 9 days of hail each year. The largest hail stone recorded in the state was 7 inches in diameter and weighed 1.33 pounds!

Dust storms occur on occasion and can be very destructive. One of the worst ones occurred during a 36-hour period between May 9 and 10 in 1935. A gigantic dust cloud swept across almost one-third of the country. It measured approximately 1,500 miles long, 900 miles wide, and 2 miles high! The cloud was so thick that it was impossible to see past it. Farm animals became ill or died as a result of the dust that covered the fodder and grass. Thousands of people suffered from irritation to the nose and eyes.

It’s important to be prepared for severe weather in Nebraska. Those who are at greater risk of lightning-related injury and death are farmworkers and outdoor enthusiasts.

If a storm is approaching, be sure to find a safe place of shelter, such as an indoor building, and remain there until the storm has passed. This guide provides a list of safety tips and resources to help you prepare!

Floods are the second-most common disaster in the Cornhusker State. Floods occur primarily as a cause of excessive precipitation during thunderstorms and overflowing riverbanks. Nebraska contains roughly 79,056 miles of rivers, which is the reason the risk is so high.

Several significant flood events have marked the state, such as:

The first step when it comes to preparing for a flood includes understanding your level of risk. Because of constant weather changes, erosion, and alterations to the topography, your level risk may change over time.

In this guide, you can learn mitigation strategies to safeguard your home and property.

Nebraska is located in Tornado Alley and experiences an average of 45 twisters each year. The peak of tornado season is between late spring and summer. Landspouts, which are quick and relatively weak tornadoes, also occur throughout the state and can happen without the presence of severe weather. Landspouts last an average of ten minutes and generally have an intensity of EF0 to EF1.

Several tornadoes have made a large impact in the state, including:

Tornadoes in the Cornhusker State are vicious. It’s crucial to have a preparedness plan which includes a place where you can take refuge during a tornado warning. In our tornado guide, you can learn clever mitigation strategies and important safety tips!

In Nebraska, you can expect winters with snowstorms, ice storms, blizzards, and wind chills. The average high winter temperatures range between 33°F and 41°F, while during the evenings it can get as low as 10°F to 15°F. The coldest recorded temperature was -47°F in Camp Clarke on February 12, 1899.

January and February are the coldest and snowiest months of the year, however, the snow season can begin as early as October and end as late as April. Snowfall totals range from 45 inches in the northwest to 21 inches in the south.

The deadliest natural disaster in Nebraska was the Schoolhouse Blizzard of 1888. During the daytime, the weather was warmer than average, however during the middle of the day, the temperature fluctuated immensely and it caught many people off guard. Hundreds of children froze to death while they were attempting to walk home from school in frigid temperatures.

Another epic winter event was a series of relentless blizzards that occurred between 1948 to 1949. The first storm occurred on November 18, 1948. With it came heavy snow and sleet, as well as gusty winds between 50 and 70 mph. Some parts of Nebraska received up to 24 inches of snow, while other parts received a lot of rain instead. The second storm occurred on January 2, 1949. This storm, too, began with rain which turned into snow as the temperature dropped. The storm brought in winds of 50 to 60 mph. Before long, people became stranded, food became scarce, and fuel and coal ran out. Eventually, the power went out too. During the last week of March, another storm passed through dropping over 20 inches of snow, and the final storm, on April 14, brought in another foot of snow. In the end, some areas received a total of 100 inches of snow, snowdrifts reached as high as 30 feet, over 150,000 cattle and sheep died, and 76 people died.

The Cornhusker State is known for the severity of its winter storms therefore it’s important to become prepared.

Right before the winter, update your home and car emergency kits. Be sure to store enough food, water, and survival provisions in the event that another blizzard leaves people stranded in their homes for days at a time.

Consider the possibility of long-term or rolling power outages. In this guide, we provide you with an in-depth resource on how to prepare!

Summers are hot in Nebraska and humid too. The hottest month of the year is July where daytime highs can peak as high as 100°F to 115°F statewide. The hottest temperature recorded in the state was 118°F on July 24, 1936, in Minden.

The western portion of the state is significantly less humid than the eastern part. For example, humidity can reach 90% in the east, whereas in the west, the lack of rainfall causes it to be much drier. For this reason, droughts are more common in the west.

One of the worst droughts and heat waves occurred in 1934. For a period of 46 days, temperatures topped 100°F and for 13 days, temperatures topped 105°F. The heat was overwhelming both in the cities and in the farms. People slept outdoors in lawns, porches, and parks because the heat was too much to bear indoors. Those on farms lost electricity and could not power water systems to hydrate their fields, which contributed to complete crop failures for that year.

The longest period of drought in the state lasted 348 weeks. It began on February 5, 2002, and ended on September 30, 2008. As of the writing of this article, the state is experiencing about 15% moderate or severe drought levels and approximately 48% is abnormally dry.

It's important to become prepared for periods of extreme heat and drought.

Power outages can be triggered by many things, including weather events, natural disasters, increasingly high demand, and infrastructure maintenance.

Several recent events have left Nebraska in the dark for long periods of time, including:

We’ve grown so accustomed to using electricity that we can easily forget what it’s like to have to go without it— even if for a short period of time. Having emergency supplies on hand can help relieve some of the pressure of not being able to flip on a switch, use a stove, or take a hot shower.

This guide includes a list of must-have supplies as well as tips to stay safe during a power outage.

Statistics show that wildfires in the Great Plains have tripled over the last thirty years. For example, between 1985 and 1994, thousands of acres were burned annually. However, between 2005 and 2014, that number surged to millions of acres burned per year.

Fires are caused by natural events, such as lightning, and by human activities, such as burning debris carelessly, farm equipment malfunction, and arson. Droughts fuel wildfires.

It’s important that we do our part to prevent fires from occurring as well as protect our homes. In this guide, we discuss several ways to mitigate possible damage to your property, including creating defensible space between your house and flammable materials. If you live in an area of high risk, you should have an evacuation plan.

Landslides occur anywhere where there are hills, slopes, cliffs, mountains, and where the ground or soil is vulnerable or weak. In the Cornhusker State, they tend to happen slowly over the course of years and are mostly triggered by lightning, heavy trucks, and earthquakes. The northeastern and eastern regions of Nebraska are especially at risk.

Duane Eversoll, a professor at the University of Nebraska- Lincoln School of Natural Resources, studied the state’s topography and was able to document 315 landslides state-wide. Many have occurred along Interstate 180 (northwest Lincoln), along Interstate 80 (near Emerald), and close to Oak Creek. The study showed that landslides between 1981 and 2002 caused the state $4.6 million.

In order to be prepared, you should determine your home and community’s level of risk. Then, implement measures to secure any areas that need to be strengthened and/or fortified. Our guide lists several helpful mitigation strategies and safety tips to consider.

The risk of earthquakes happening in Nebraska is super low but that doesn’t mean that it’s nonexistent. No major earthquakes have happened in the Cornhusker State but aftershocks and seismic tremors have been felt on occasion.

Minor faults have been identified in the state, primarily in the eastern portion of the state along the Union Fault Line and along the southeastern region along the Humboldt Fault Line. Still, the shakers produced in these areas generally range between 2.5 to 4.3 in magnitude and rarely exceed 5.0.

If a quake occurs, you’ll likely notice rattling windows, cracked walls or plaster, items knocked on the floor, and moving light fixtures. You can become prepared by securing important or valuable items beforehand. Our earthquake guide gives pointers on how you can do this!

Nebraska is prone to several types of natural disasters, so we highly encourage you to become prepared ahead of time. The following resources are free and available for you to get started.

I hope you enjoyed learning about natural disasters in Nebraska.