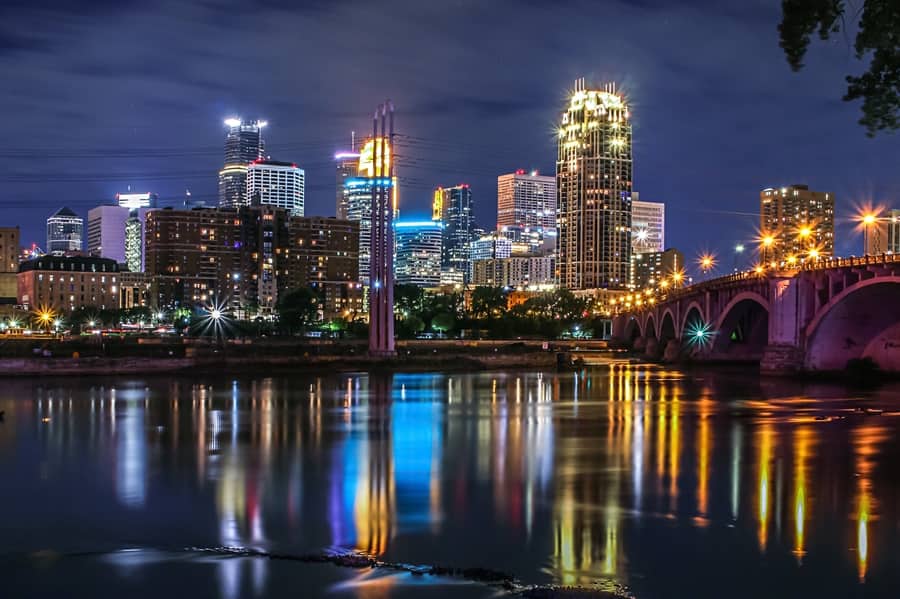 Minnesota was the 32nd state to join the union and was named after the Dakota Indian words “minni” meaning water and “sotah” meaning sky-tinted. Therefore, the state name means sky-tinted waters.

Minnesota is nicknamed the North Star State and Land of the 10,000 Lakes. In reality, however, the state boasts over  11,842 lakes larger than 10 acres, as well as 69,200 miles of streams and rivers, and thousands of wildlife, fish, and farm animals.

The North Star State is famous for its natural beauty and landscapes, historical sites, attractions, heritage festivals, several top-notch museums, and is the home of many Fortune 500 companies.

Minnesota experiences all four seasons with its diverse climate, as well as its fair share of natural disasters.

What natural disasters does Minnesota have?

Between 1953 and 2019, Minnesota declared 63 major disasters, of which floods and severe storms happened the most according to FEMA.

General flooding and flash floods are major natural disaster threats in Minnesota. Floods are caused by spring snowmelt and periods of consistent rainfall that cause the rivers to swell. Flash floods occur as a result of intense localized rain which overwhelms storm drainage systems and streams.

Minnesota has experienced many significant floods, such as:

Floods are dangerous. Even when floodwaters seem to be low, they carry enough strength to knock people off their feet, sweep vehicles away, and cause structural damage.

For your safety, it’s important to steer clear of floodwaters and never attempt to cross them. Also, remember that they are typically contaminated with sewage and debris. Check out this guide to learn more about flood safety tips and mitigation strategies.

Thunderstorms can occur any time of year in Minnesota, however, they’re more common between March to November and during the afternoon to evening hours. Severe storms usually bring is heavy localized rainfall, thunder and lightning, strong gusty winds, and sometimes hail.

On average, the North Star State receives 18 inches of annual precipitation in the far northwest and more than 32 inches in the southeast. Its largest hail stone was recorded at 6 inches in diameter.

One of the worst storms in the state’s history was the wind storm of September 2011 when winds of up to 121 miles per hour blew near the small town of Donaldson for a period of 10 minutes. This storm caused damage to homes, grain bins, and trees.

The severity of thunderstorms should not be underestimated. Minnesota ranks 29th nationwide in terms of lightning-related fatalities. And each year, there is an average of 386,131 cloud-to-ground strikes. When thunder roars, go indoors! Lightning can strike miles beyond the radius of the storm, so the safest place to be is inside a strong structure, not outdoors.

It’s recommended that those who live in a mobile home go to a more permanent structure if strong winds are forecasted. To learn how to stay safe during a severe storm and how to mitigate damage, check out this guide.

While the boundaries of Tornado Alley are not clearly defined, Minnesota sometimes is included in it. Minnesota averages 45 tornadoes annually. They have occurred every month between March through November, however statistically, June is the month with the greatest frequency, followed by July, May, and August. Tornadoes can occur any time throughout the day, however, they’re most common between the hours of 2:00 PM and 9:00 PM local time.

June 10, 2010, marks the most active tornado day in the history of the North Star State. On that day, 48 tornadoes (nineteen EF0, eighteen EF1, four EF2, four EF3, and three EF4) tore through 22 counties across Minnesota. The damages were extensive, including uprooted and snapped trees, tossed boats, docks, and vehicles, significant damage to homes, and three deaths.

Residents of Minnesota should prepare for future tornado events by having an emergency plan in place. Determine safe locations to take shelter until the tornado dissipates, and have supplies on hand to tend to basic needs.

Our tornado preparedness guide gives insight into how you can mitigate possible property damage as well as which vital items to keep in your tornado shelter.

Minnesota averages 1,500 wildfires annually, however, in recent years that number has almost doubled. An estimated 98% of fires are linked to human activity, such as careless burning of debris, equipment malfunction, vehicle issues, smoking, campfires, and arson. The remainder 2% is linked to lightning.

One of the worst fires in the North Star State’s history was the Cloquet-Moose Lake fire that occurred in the northern region in October 1918. In as little as 15 hours, over 250,000 acres of forestland burned down, over 52,000 people were injured, and 453 people died. The cause was linked to sparks from the train. This was the deadliest natural disaster in Minnesota’s history.

The fact that so many fires are human-caused should inspire us to be more cautious, as we play a major role in preventing them from occurring. A huge rise in the state’s number of fires has been linked to automobile incidents. Therefore if you’re driving and need to pull over along the highway, do so in an area that does not have dry grass or vegetation. The heat from the exhaust can ignite it quickly.

To protect yourself and your home from the threat of wildfires, there are mitigation steps you can take. In this guide, we go through each step as well as discuss safety tips to keep in mind for the future.

Winter precipitation in Minnesota includes snowfall, freezing rain, sleet, ice, and occasionally blizzards and rain. Even though the majority of snow falls between November and early April, there have been snowstorms recorded during every month of the year with the exception of July.

Minnesota averages 110 days a year with at least 2.5 centimeters of snow cover. The snowiest parts of the state include the Lake Superior highlands and a ridge of higher terrain located along the North Shore. The coldest temperature ever recorded in the state was -60 °F on February 2, 1996, in Tower.

One of the worst blizzards in the state’s history was the Armistice Day Blizzard of November 1940. This storm brought in winds between 50 to 80 mph, snowdrifts of up to 20 feet, temperature drops of 50°F, a combination of heavy snow and rain, and a tornado. Hunters were improperly dressed and many became stranded on the Mississippi River Islands while others drowned trying to reach the shore. The death toll reached 154, however, only 49 of those were in Minnesota. Over a million and a half turkeys also died from exposure to the cold.

The weather patterns can change quickly, so it’s crucial to be prepared during the winter season. If you drive often, you should have extra emergency supplies in your vehicle to keep you hydrated, fed, warm, and dry.

Read our winter preparedness guide to learn which items we recommend.  After significant snowstorms, remove excess snow from your roof to prevent it from accumulating and collapsing.

Although less common than other disasters in the state, Minnesota experiences summer heat waves and occasional periods of drought. Heat waves are common towards the end of June and well into the end of August. July is the hottest month of the year with many days of 90°F weather. Summer brings in oppressing humidity, which isn’t present during the spring months, making the heat less tolerable during that season.

The southern part of the state is warmer and more humid, compared to the northern part which is cooler and drier. Currently, an estimated 110,000 residents are vulnerable to extreme heat.

The longest heat wave in recent history occurred between June 3 and 11, 2021 when hot and muggy weather dominated for what seemed like days on end, much too early in the season.

One of the primary issues when it comes to heat waves is your health. Oftentimes, electrical companies will become overloaded with the high demand, leading to controlled or sustained power outages. Other times, your body may become affected with heat illness, which if not properly addressed, can lead to long-lasting health issues or even death.

In our guide, we discuss which symptoms to look out for, as well as how to mitigate the effects of extreme heat whether you have electricity or not.

Based on power outage data, Minnesota residents experience blackouts that last an average of 3 hours per year.

This number is relatively low, when compared to other states, however, the truth remains that our nation’s power plants are vulnerable and electricity is a luxury. Therefore, we should be prepared for long-lasting or rolling outages especially when faced with extreme weather events.

One of the longest outages in the North Star State’s history occurred on June 25, 1998, when lightning struck a power line twice. The transmission failure took a long time to fix and many people were left without electricity for up to 19 hours.

Disasters can be difficult to navigate through, but how about the added side-effect of power outages? In a world of unpredictability, it would be wise to prepare for long-term disruptions to our electricity.

You can do this by storing the right equipment in your emergency kit (click here to view our suggestions) and by practicing your family plan. One of the best ways to practice your power outage plan would be to go a day without electricity.

Choose a day to turn off the power in your home for at least 24 consecutive hours. Then, use the supplies in your kit and whatever else you have on hand at home.

After this simulation, you can determine which items worked best for you, which items you may need, and how to adjust your plan as a whole. Learn more about power outage preparedness here.

Minnesota has a moderate susceptibility and low incidence of landslides, however, the southeastern region is at a higher risk. The Red River Valley experiences a threat mainly because it lies above weak clay soils that fail frequently, therefore undermining the roads and homes built above it.

Landslides are mainly caused by bluff erosion, slope failure, significant rainfall, soil saturation, shifts in the ground, rockfalls, and building too close to the edges of cliffs.

Scientists are finding that more landslides are occurring state-wide, however, the investigation is ongoing regarding where the threat is highest as well as the best possible way to mitigate effects.

One of the worst landslide events in the history of Minnesota occurred in June 2012 after a two-day rain in Duluth. This led to hundreds of landslides which permanently damaged and altered the landscape of Jay Cooke State Park.

In order to prepare for a landslide, you should first determine your level of risk, as well as your community’s. Then, determine which mitigation strategies will work best to secure your property.

Learn alternative routes within your city if there is a threat of roads getting obstructed or being washed out. Finally, have an evacuation plan and know how to get to safety if a landslide is forecasted or occurring. Check out this guide for a complete list of ideas and tips.

Since 1860, only 20 small to moderate earthquakes have been recorded in the state. I think it’s safe to say that this is not Minnesota’s greatest threat.

Minnesota is vulnerable to different types of natural disasters, so it’s recommended that you become prepared well ahead of time. The following resources are a great place to start!

I hope you enjoyed learning about natural disasters in Minnesota.