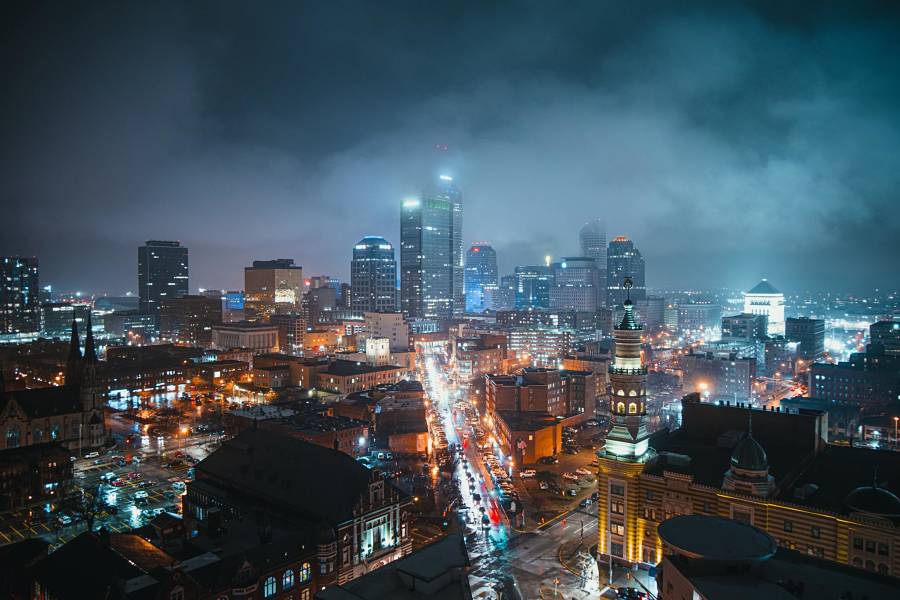 Indiana is popularly known as the Crossroads of America. Some time ago, it was the hub for shipping and transporting products that moved throughout the United States.

One unique feature the state has is its highway system. All major highways in the state lead right to Indianapolis.

Before highways, however, railroads were the primary form of transportation. Today, one of the old train routes has been transformed and turned into the state’s biggest walking trail, boasting 26 miles of asphalt. This trail is known as the Monon Trail.

The Hoosier State is known for its rich colonial history, the Indy 500, its automobile manufacturing industry, vast farmlands, the people’s deeply rooted love for basketball, and pork tenderloin sandwiches.

Indiana enjoys all four seasons, especially hot and humid summers, cold winters, and other hazardous weather in between. As you can imagine, natural disasters are common.

What natural disasters does Indiana have?

Between 1953 and 2019, Indiana declared 49 major disasters, of which severe storms and floods happened the most according to FEMA.

Indiana experiences several different types of severe storms, such as heavy rainfall, large hail, strong and gusty winds, and thunderstorms with lightning. While these storms are possible any time of year, they occur more frequently between the spring, summer, and fall months. The peak month, in terms of rainfall and thunderstorms, is May.

These are some interesting storm facts that may (or may not) interest you:

Storms can catch us by surprise, so know what to do in the event that you're caught off guard. Be sure to take cover under a closed building immediately when hearing thunder or seeing lightning, even if it appears to occur far away. Lightning can travel and strike far distances! Check out our guide for more storm safety information.

Before settlers called Indiana home, twenty-four percent of the state was covered in wetlands. Therefore it should come as no surprise that flooding is not a matter of ‘if’ but ‘when’ in the Hoosier State.

Based on current floodplain maps, over 282,500 properties are located in an area that is vulnerable to flooding. Recent research, however, shows that many homes and businesses have not been accounted for in that calculation, therefore a more accurate number of 396,100 properties are actually flood-prone.

One of the most significant floods to have affected the state was the Great Flood of 1913. A wild storm brought in strong gusty winds and several inches of rain in a short period of time. This prompted mass evacuations and resulted in significant damage including fallen trees, ground saturation, overflowing rivers, severe flooding, the destruction of properties and over 180 bridges, a major interruption to the distribution of food and supplies, loss of crops, and several fatalities. This event went down in history and it should serve as a reminder to Hoosiers that preparedness is key.

There are several strategies that can be implemented to prevent your home from flooding, such as safeguarding the entrances of your home with sandbags. In the event of a flood, stay away from floodwaters since it’s likely to be contaminated and if there's a current, you may get easily swept away. Find our complete list of mitigation and safety tips here!

Wintertime in the Hoosier State is extremely cold with temperatures reaching as low as 0°F. If combined with wind, the chill can be felt down to the bone. The coldest recorded temperature in Indiana was -37°F in New Whiteland on January 19th, 1994.

Due to its proximity to Lake Michigan and lake-effect snow, the Northern part of the state gets the bulk of the snowfall. The state’s average total snow accumulation ranges from 4 inches to 96 inches or more, depending on the city. Ice storms are another thing to watch out for.

There have been several significant winter storms in the state. One of the most notorious blizzards began on January 25th in 1978. The storm brought in significant amounts of precipitation, as well as wind gusts of up to 50 mph which caused low visibility and created snowdrifts as high as 25 ft. This storm buried Indianapolis in 20 inches of snow and killed 70 people.

Another significant storm was the Great Blizzard of 2011 which occurred near the end of January and lasted early into February. A combination of freezing temperatures, snow, ice, wind gusts of up to 70 mph, lightning strikes, and rolling thunder made this storm unique. The blizzard left over 50,000 people without electricity and several people died.

In order to be prepared for a winter storm, you should have all the supplies you need to shelter at home for several days (we recommend fourteen). A big storm can wreak havoc on roads, infrastructure, and the transportation of supplies. Be prepared for the worst and consider the possibility of power outages as well. Learn how to become ready for the next winter storm here!

Indiana averages 22 tornadoes a year and is sometimes included as part of Tornado Alley, even though its boundaries are not clearly defined.

The state experiences the peak of tornado season around the spring and early summer months (April, May, and June) and sometimes during the fall as well. The majority of the tornadoes in the Hoosier State are mild and short-lasting, but occasional strong ones are possible.

One of the worst tornado outbreaks in Indiana’s history was the 1965 Palm Sunday Tornado Outbreak when multiple F3 and F4 tornadoes plowed through twenty counties across the state, leveling everything in their path. These tornadoes injured 1,700 people, killed 141, and caused the worst structural damage the state has ever experienced.

Tornadoes don't give us much of a warning time. For this reason, you should practice situational awareness and make it a habit to observe your environment wherever you go. Say you're at home, at the grocery store, at work, the gym, or wherever-- identify a place where you can take cover should a tornado occur at a moment's notice.

For example, if you're home, consider taking shelter inside a bedroom closet or a room with no exterior windows on the lower floor of your home. To learn more tornado safety tips, check out this guide.

Even though Indiana doesn’t have mountains over 1,257 feet, it has plenty of hills and slopes. The southern half of Hoosier State is moderately susceptible to landslides, but the incidences have thus far been low.

Landslides can be triggered by soil saturation, heavy precipitation, and manmade causes. In order to become prepared, you should first identify vulnerable slopes and hills within your property. Then, reinforce those areas as mentioned in this guide.

Also, consider the possibility of a landslide occurring in or near your city. Could your typical commute be affected by one if a road becomes washed out, for example? If so, determine which alternative routes you may have access to instead. Learn more landslide preparedness tips here!

Power outages affect all of us at some point or another. Any small event can disrupt the power lines and leave us in the dark, so imagine what could happen during a large-scale disaster.

A 2018 report revealed that the number of outages is increasing over the years. Some reports show the numbers of people affected by outages and their causes. In most cases, severe weather was the culprit, in which several of these outages left a few hundred thousand to millions of people in the dark for a week or more at a time. A few examples include an ice and wind storm in 2007 and a severe thunderstorm in 2012.

Without a doubt, long-lasting outages are possible in the future. Consider the possibility of losing electricity for a week or more. Do you have the necessary supplies to cook meals, maintain hygiene, and stay warm or cold (depending on the season) without the use of electricity?

If not, we recommend that you prepare an emergency kit with the supplies you need — here you'll find a complete list of ideas— and spend a day without electricity to see how well you do. This type of hands-on practice will help you identify weak points within your plan so that you can improve it and be ready when the next long-term outage occurs.

Although not the most threatening of all its possible natural disasters, Indiana experiences occasional earthquakes. A major fault line, the Wabash Valley Seismic Zone, runs across the Southwestern part of the state, and just southwest of that lies the New Madrid Seismic Zone. Studies show that both of these seismic zones are capable of producing earthquakes with a magnitude of 7.1 and higher.

The strongest earthquake in Indiana occurred on September 27, 1909. It had a 5.1 magnitude. It caused some damage, such as cracked walls and broken chimneys, and was felt within 30,000 square miles of the epicenter.

It’s wise to be prepared for an earthquake. You can do this by practicing drills with your family in which you are able to identify several places around your home that would be safe for you to take cover. Do a walk-through of your home and find objects that need to be properly secured, such as wall decorations. View our complete guide on earthquake preparedness and safety here.

Almost 20%, or 4.9 million acres, of the Hoosier State is covered in forest land. In those forests, there are an estimated 2 billion trees!

While the threat of wildfires is very mild compared to most other US states, it’s still a hazard to consider. The largest fire in the state’s recorded history was the Dutch Ridge Fire which occurred in October 1952 and burned over 5,000 acres of state and private land.

Our guide on wildfire preparedness provides you with the necessary resources to ensure you safely mitigate your risk and know how to stay safe in the event of an approaching fire. You can check it out here.

The Hoosier State has occasional periods of extreme heat and drought and summers are generally met with oppressive humidity. The hottest recorded temperature was 116°F in Collegeville, Jasper County on July 14, 1936.

One of the worst and deadliest heat waves in Indiana lasted seven days (between July 11 and 14 in 1995). The temperatures reached well above the 90s and in some places, just over the 100s. As a direct result, 14 people died.

A person who is caught unprepared for a heat wave may not be aware of the risks associated with extreme heat and heat-related illnesses. Learn how to stay cool as well as what to look out for when it comes to heat illness. Should someone develop symptoms, you may be able to get them help before it becomes serious. In this guide, you'll find mitigation strategies, as well as safety tips and other suggestions to help you survive extreme heat.

There are many resources you should take advantage of to prepare for disasters that occur in Indiana. These are some options:

I hope you enjoyed learning about the disasters that are likely to affect Indiana.

Want to look up another state? Find out which disasters are common in other parts of the United States here!