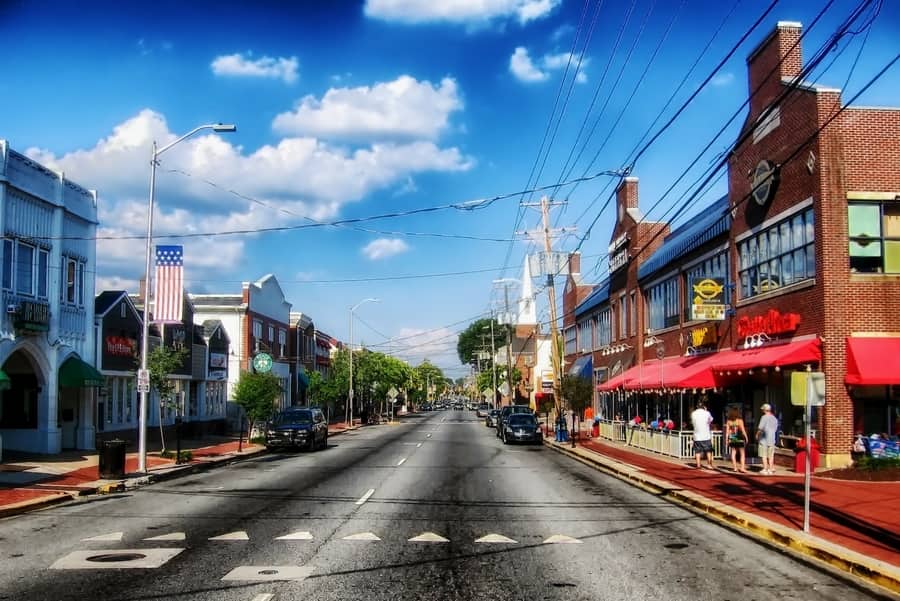 The small but mighty state of Delaware is also known as the First State. It received this nickname because it was the first of the 13 colonies to ratify the Constitution.

Delaware is the second smallest US state, and yet the 6th most densely populated. It’s about 35 miles at its widest point and less than 100 miles long. Even with its small capacity, it has thriving fishing, agricultural, manufacturing, and mining industries, some of which have long historical origins.

Even though it doesn’t have its own professional sports team, First Staters love and support various sports. Delaware adopted its own sport, Punkin Chunkin- the sport of chucking a pumpkin by DIY mechanical means. They also host at least one NASCAR Cup Series race each year and they raise money for the Special Olympics during their annual polar plunge.

Delawareans are extremely friendly people who enjoy their beaches in the off-season and delicacies such as blue crabs, oysters, horseshoe crabs, and muskrat. Without a doubt, it’s a beautiful state with a lot to offer!

Delaware’s natural disaster threat is not as high as it is in other states, however historically we know some of its hazards have left notable impacts and have the potential to do so again.

What natural disasters does Delaware have?

Between 1953 and 2019, Delaware declared 21 major disasters, of which hurricanes and winter storms happened the most according to FEMA.

Being located along the eastern coast, it’s no surprise that one of the main natural disasters Delaware is threatened with is tropical storms. While no such storm has made direct landfall on the Delmarva Peninsula, the effects are no less damaging.

Hurricane-force winds have only affected Delaware twice since 1851, but their remnants (in the form of tropical storms) are definitely experienced. The major side-effects of these storms are coastal storm surge, heavy surf, rip currents, strong winds, and considerable amounts of rainfall.

The strongest storms to affect Delaware in recent history were Hurricane Irene in 2011 and Hurricane Sandy in 2012. In both of these events, the damage was severe. Flooding was reported state-wide, as well as fallen trees, power outages, and road closures. As a result of Hurricane Irene, two Delawareans died.

Tropical storms and hurricanes are a threat every year. Those living along the coast should retrofit their homes to protect them during hurricanes. Some ideas include installing storm shutters or cutting plywood to fit the side of your windows. When a storm is forecasted, you should be prepared with the materials to cover the windows and evacuate, if advised to. For a list of evacuation essentials and hurricane safety tips, check out this guide.

Nor’easters are coastal storms much like hurricanes, except they form over cold water. Being located a little further north, Delaware is more prone to nor’easters. In fact, the state experiences somewhere between 5 to 12 of them per year. They’re not always severe but they can be.

One of the worst coastal storms to hit Delaware was the nor’easter of 1962, otherwise remembered as the Ash Wednesday Storm of 1962. The extent of the damage was horrific— winds of up to 64 mph pummeled the coast, roads turned into rivers, the beaches eroded, the boardwalks were washed away, homes were ripped off of their foundations, some homes were buried under several feet of sand, large boats were displaced from their docks into wooded areas where they can still be found today, agricultural land was destroyed by saltwater, and seven people lost their lives (in Delaware alone). The cost of damages was estimated at $50 million (1962 USD).

If you live in or near Delaware's coastal areas, you should have a preparedness plan ready. Know where to go and which roads to take to reach higher ground if large waves and flooding are expected. Have a communication and reunification plan with your family to ensure you can get in touch if you become separated at any point or are not together when the storm occurs.

The First State has cold and snowy winters. January is the coldest month of the year with temperatures averaging  25°F to 44°F. February is the snowiest month and the state averages 15.2 inches annually. The coast receives a lot less snow than inland cities.

One of the heaviest snowstorms to affect Delaware (and much of the East Coast) was Winter Storm Jonas in January 2016. The category 5 storm brought in strong winds and heavy snowfall which produced blizzard-like conditions, and a storm surge of over 4 feet the normal tide. This resulted in significant flooding, especially along the coast, as well as widespread power outages, destruction of 20 miles of dunes, and a chemical leak. It is estimated that at least 55 people died as a result of this storm— one of them was from Magnolia, DE.

Winter storms like Jonas are rare but not completely out of the question. To ensure your safety during the winter season, you should always carry an emergency kit in your vehicle equipped with chains that fit your tires, items to signal for help if you get stranded, some snacks, water, and things to keep you warm, like hand warmers and emergency blankets.

If the weather forecast predicts heavy snowstorms or blizzards, avoid any unnecessary travel and be prepared with enough supplies at home to shelter in place for several days. To learn more about becoming prepared for the winter, read our guide.

Delaware has an average of 30 thunderstorms per year, which typically occur between May and August— July being the peak month.

Storms come in the form of heavy rain, strong gusty winds, thunderstorms with lightning, and hail. The First State has been under a severe storm watch 125 times in the last year, of which hail was detected on 17 separate occasions. Hailstones between 1.5” to 2.25” have been reported.

When it comes to thunderstorms, Delaware ranks 43rd among the US in terms of lightning fatalities by state. Between 1959 to 2016, only 15 lightning-related fatalities have been recorded. It doesn’t sound like much, but even one fatality is a lot considering there are many precautions you can take to prevent getting struck.

When storms are predicted or you see one approaching in the distance, it’s important to take safety precautions seriously. If you’re outdoors, find a place indoors that you can take refuge in until the storm passes.

Once you’re indoors, avoid touching anything that can carry an electrical charge, such as a landline telephone, the faucet, and anything hooked to a socket in the wall. Wait for at least 30 minutes after the last clap of thunder is heard or and lightning is seen before resuming any outdoor activities.

With a mean elevation of 60 ft, almost all of Delaware stands at a significant risk of flooding. The southern coastal region is considerably more prone, of course, but low-lying areas are threatened as well. Data suggests that the First State ranks among the worst states with future risks of floods.

The average 44” to 47” of rain that Delaware receives annually presents a risk for its many streams, rivers, and lakes to overflow. During any severe or coastal storms, such as hurricanes, nor’easters, and thunderstorms, large waves are known to crash along the beaches resulting in severe coastal flooding.

Some of the record floods that the state has experienced were the result of other significant storms. For example, Winter Storm Jonas, the Ash Wednesday Storm of 1962, Hurricane Isabel, Hurricane Sandy, and the historical Gale of 1878.

As you can imagine, each flood comes with a huge price tag. The toll it takes on a state’s economy is immeasurable. Among other things, it includes the destruction of infrastructure and personal property and even worse, the possible loss of life.

Floods can’t necessarily be prevented but they can be prepared for. Determine what your property’s specific flood risk level is and take proactive measures to ensure that your home is as safe as possible. In the event of a flood, be cautious and do not drive or cross floodwaters. Not only can the current be strong enough to pull you but also, the water is toxic. For flood safety and mitigation tips, check out this guide.

Another thing to think about is insurance. As floods become more and more severe, homeowners are finding it difficult to find affordable flood insurance. In fact, some insurance companies no longer offer flood coverage because the risk is too high. Those who don’t have insurance will have to come up with another solution for the cost of the damages incurred or will have to pay out of pocket.

Power outages can occur anywhere and at anytime, but are especially common during natural disasters. Preparing for future outages is critical, especially if you or someone in your household are dependent on some type of electrical device.

In this guide, we’ve outlined important safety tips and must-have supplies to survive a power outage. We recommend you read it, put your plan into action, and then have a blackout day or weekend where you turn off the electrical main at your home and practice having a 24 hour plus outage. This hands-on activity will help you determine what worked for you and what didn’t. From there you can fine-tune your plan wherever it needs improvement.

Delaware summers are warm and humid. The temperature normally doesn’t exceed 94°F, however, every now and again, heat waves roll in with the possibility of temps in the triple digits. An estimated 20,000 Delawareans are vulnerable to extreme heat.

In preparation for periods of extreme heat, you should store enough water to keep you hydrated, learn the symptoms of heat illness, and identify cooling centers nearby where you can hang out during the hottest part of the day. Learn more about how you can stay safe during a heat wave here!

Delaware averages one tornado per year. The state ranks 44th in terms of tornado frequency. The record number of tornadoes for the First State in a single year was six in 1996.

While they’re clearly not the most common natural hazard to affect the state, we recommend becoming familiar with safety tips to ensure you know how to respond in the event that one happens near you. Learn how to prepare for a tornado here.

There’s a lot you can do to become prepared for future disasters. We encourage you to take advantage of the following resources.

I hope you enjoyed learning about Delaware’s most common disasters.