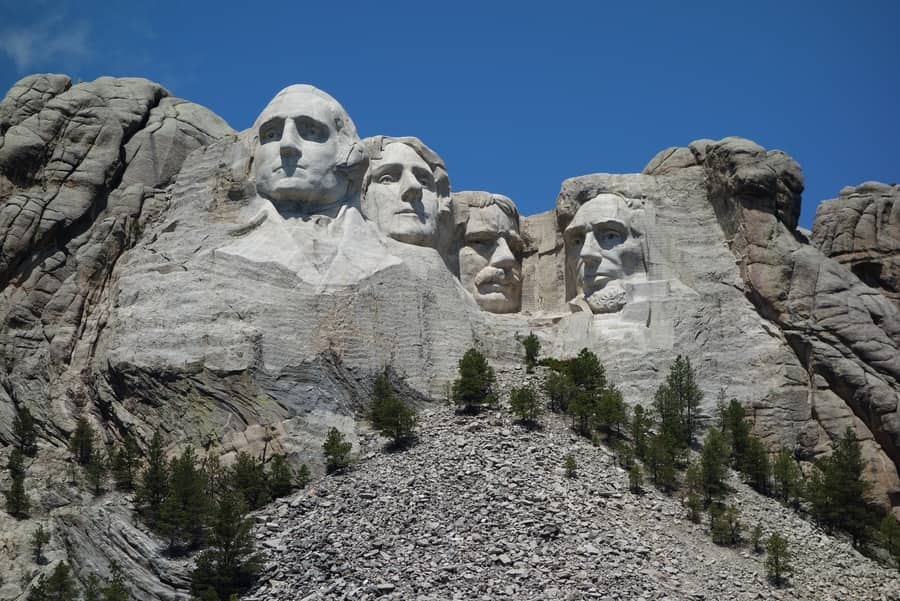 South Dakota is located in the heart of the North American continent. It’s the 17th largest state in the US and the 5th least populated.

Imagine a world where you learn to drive before age 16, where there’s no traffic, where you never have to lock your doors, and where you know your entire community by name…that’s what it’s like for many people living in the Mount Rushmore State!

Due to its location, the state experiences weather extremes that are characteristics of continental climates. Don’t be surprised if you hear a South Dakotan say: “Wait five minutes and the weather will change.”

Apart from its freezing winters and blistering hot summers, the state is prone to a few natural disasters.

What natural disasters does South Dakota have?

Between 1953 and 2019, South Dakota declared 70 major disasters, of which severe storms and floods happened the most according to the Federal Emergency Management Agency (FEMA).

South Dakota experiences severe storms in the form of lightning and thunder, gusty winds, large hail, supercells, super bow echos, and an average of 20 inches of heavy rain annually. Most storms come and go quickly but can leave major damage behind.

The state holds many weather-related records, including:

One of the worst hail storms in the state occurred on July 25, 1986, at Black Hawk and Northern Rapid City as well as near Huron and Miller. Hail, measuring 1.25 inches in diameter, fell for nearly an hour and a half and piled up to 2 feet in depth. As a result, hundreds of vehicles and buildings were destroyed and crop damage was extensive.

Another recent major event occurred in May 2022. According to South Dakota State News, "South Dakota has received a Presidential Disaster Declaration that allows FEMA to help South Dakota local governments in 20 counties and on two reservations recover from public infrastructure damage sustained as a result of tornadoes, severe storms, straight-line winds, and flooding that occurred on May 12 in the eastern part of the state."

Events like these are a major threat to the state of South Dakota. Under the right atmospheric conditions, a severe thunderstorm can develop quickly.

If a storm is forecasted, it’s important to find shelter immediately and remain there until the storm passes. Stay in an interior room or far from exterior-facing windows and doors. To learn how to prepare for severe weather, check out our complete guide here.

The Mount Rushmore State has several main rivers including the Vermillion, James, Missouri, Cheyenne, White, Big Sioux, Moreau, and Grand. During periods of heavy precipitation, rapid snowmelt, and drought, these rivers and nearby streams are prone to overflow.

While flooding can occur anywhere in the state, the eastern half is affected the most. Some sources estimate that in 2050, over 63,000 homes will be at substantial risk.

The worst flood in South Dakota’s history was the Black Hills Flood of 1972, also known as the Rapid City Flood. On June 9th, around 15 inches of rain fell in under 6 hours. The destruction was massive.

Around 2,500 homes were significantly damaged, at least 1,335 homes and 5,000 vehicles were destroyed, Canyon Lake Dam collapsed, and the majority of bridges spanning Rapid Creek were washed away. This tragic event caused 238 fatalities, making it South Dakota’s deadliest natural disaster to date.

South Dakotans should be prepared for a flood, especially those who live near streams and rivers. If you live in a high-risk area, consider the possibility of flood insurance.

Before a flood occurs, identify the safest place to go and discuss evacuation options with your family members.

In the event of a flood, get to higher ground immediately and do not attempt to cross flood waters.

In this comprehensive guide, you will find information on how to mitigate floods, as well as tips on how to stay safe. Remember to print the free checklist at the end!

Winters in South Dakota can be pretty brutal. The state is prone to blizzards with heavy snow and ice storms, and typically receives 39 inches of snow annually.

The cold season begins around mid-November and lasts until early March, however, there’s generally an early freeze that occurs in September or October and a late freeze that tends to occur in May.

January, being the coldest month of the year, experiences average highs below 32°F and average lows below 10°F. The strong wind adds an extra element of chill that can be felt down to the bones.

The Mount Rushmore State has a history of intense winter storms, including:

Being prepared for a storm during the winter is a must! In this guide, you can learn important safety tips on how to stay safe before and during a winter storm.

South Dakota has average summer temperatures of 70°F with occasional periods of extreme heat. Currently, the state experiences up to 10 days a year where temperatures are likely to reach between 90°F and 100°F. The hottest temperature recorded in the state was 120°F in Usta on July 15, 2006.

Nearly 25,000 people in the state are vulnerable to extreme heat and this number is projected to increase. Heat is often accompanied by periods of drought.

According to the U.S. Drought Monitor, the longest period of drought in the state lasted 349 consecutive weeks. It began on December 4, 2001, and ended on August 5, 2008. At one point, nearly 33% of the state experienced D4 conditions, which is the highest drought intensity value.

During periods of extreme heat and drought, it’s important to implement conservation practices and learn the symptoms of heat illness. In this guide, we highlight tips on how to become prepared for such situations and how to stay safe.

The USDA's Natural Resources Conservation Service (from the U.S. Department of Agriculture) provides additional information on ways farmers can improve their land to conserve water, soil, and natural resources. If you're a farmer, it would be a good idea to check out the program options that may be available to you through their Environmental Quality Incentives Program.

Even though the boundaries of Tornado Alley are not officially defined, the core of that region extends into South Dakota. The state experiences an average of 26 tornadoes annually with the peak of the season being June. Although they can occur during any time of the day, they’re more likely to occur in the early afternoon.

One of the largest tornadoes recorded in the state occurred on June 20, 1968, and measured a mile and a half wide. The strongest tornado was recorded on May 8, 1965. It was an F5 tornado that traversed Tripp County with wind speeds of over 200mph. Miraculously, it caused only one injury.

It’s crucial to be prepared for a tornado if you live in South Dakota. They occur with little to no warning, so identifying safe places to shelter in is a great place to start. In this guide, you will find mitigation strategies and safety tips to help you feel ready. There’s a checklist you can print at the end of the article for you to keep as a reference.

South Dakota experiences roughly 1,000 wildfires and tens of thousands of acres burned annually. The intensity of these fires depends on the levels of drought. They can be caused by nature, such as lightning storms, and by people, either because of the careless burning of materials or arson.

The state has lived through several intense forest fires. One of them occurred during the drought of 1974 in the Black Hills. More recently, in August 2000, the Jasper Fire burned more than 83,000 acres, making it the largest fire in state history. It burned about 90% of the land area of the Jewel Cave National Monument.

There are several things we can do to prepare for a wildfire. First, we must take extra precautions when burning garbage or other materials. Keep enough supplies nearby to extinguish the fire in case it begins to get out of hand, and never leave a flame unattended.

Secondly, you should create defensible space around the perimeter of your home. In other words, make sure no branches are hanging over your roof, and keep any flammable materials several feet away from your home. Check out this guide for a complete list of mitigation strategies and safety tips.

Landslides can occur in hilly or mountainous locations. The Mount Rushmore State has approximately 585 peaks, some of them as high as 7,000 feet or more. This makes it a place of high susceptibility but (luckily) low incidence. The risk is higher in the western half of the state.

Landslides can be caused by natural and manmade causes. Debris flows are possible as a result of soil saturation after periods of heavy rainfall, drought, and at the site of wildfire burn scars.

In South Dakota, landslides are primarily linked to manmade causes, specifically the building of structures in mountainous areas. Landslides have occurred in the Pierre shale close to the Missouri River where the number of construction projects has increased.

There are several things to consider when preparing for landslides. First, you’ll want to survey your land and find any areas that could be reinforced to prevent potential collapse and property damage.

If you live in a mountainous region, it would be wise to identify one or two alternate routes in case a landslide destroys the roads you frequent most.

While that may not sound like a big deal, the reality is that when they last longer than a few hours, they have the potential to cause a lot of issues, apart from becoming a major inconvenience to people's lives.

At best, they can cause minor damage but when power lines are destroyed, the outage may last much longer. Imagine that most toilets rely on electric pumps to flush and refill properly. Not being able to dispose of waste becomes a huge health hazard.

Another thing to consider is preserving the food inside your refrigerator. A couple of hours without power should not cause too many issues, but as your fridge gets warmer and the freezer starts defrosting, you risk food spoilage.

Be sure to have a plan ahead to prevent issues like these from occurring. Learn how to mitigate power outages here.

Although earthquakes are extremely rare in the state, it’s possible to feel occasional shakers with an average of 3.0 magnitude. The cause of the earthquakes is usually linked to the deep adjustment of basement rocks underlying the state.

The strongest recorded earthquake in South Dakota dates back to 1911. It occurred in Huron and had a magnitude of 4.5.

Just like all other states, South Dakota gets hit by several types of natural disasters. The good news is that there are many ways to become prepared as well as seek assistance after a disaster has occurred.

Check out the following resources:

I hope you enjoyed learning about the disasters that affect South Dakota.