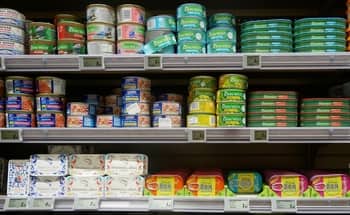 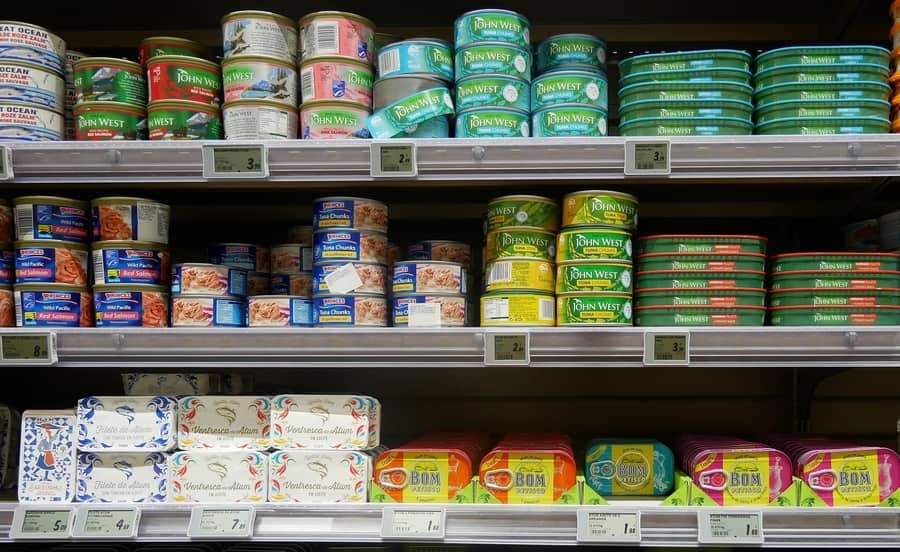 Yes, heat is the enemy of all canned goods. Food stored in cans will spoil quickly if exposed to high temperatures, especially over 95 degrees F. It’s best to store all your food in a temperature controlled environment that is kept at or below 70 degrees F.

How are canned foods affected by hot and cold temperatures?

Temperature fluctuations can greatly diminish the quality and shelf-life of your canned goods. Whether you store cans in your car, pantry or garage, you will face the following issues because of the hot and cold environments the cans have been exposed to:

Hot: High temperatures are harmful, causing quick spoilage and nutrient loss. Canned goods sold in the tropics go through a special manufacturing process for this reason.

Bright / Too Much Light: Food canned in clear jars that has been exposed to light will also cause nutrient loss, as well as possible discoloration.

How to store canned food for the long term

The United States Department of Agriculture recommends you to store cans in a shelf-stable environment, unless otherwise noted. Shelf-stable is any place where the room temperature doesn’t change much, preferably a dry and cool place below 75 degrees Fahrenheit.

There are exceptions to this, with items such as ham and seafood which must be kept at lower temperatures, and will be specifically labeled “Keep Refrigerated.”

The best place to store canned food in your house

The temperature inside your home is least likely to fluctuate because you have more control during the summer and winter months. You are more likely to control extreme temperatures in the areas of your house where you spend most of your time in.

Places you should never store canned food in

Canned food, and emergency food altogether, should never be stored in locations where the temperature is unstable, such as the following:

How to tell if canned food has gone bad

Milky substance: If the liquid covering the veggies inside the can has a milky appearance, do not eat it.

Dent: If the dent is large enough that you can stick your finger into it, it should not be eaten. A dent can cause a small opening on the can and allow bacteria to enter. Cans that have a small dent should be okay but inspect it prior to eating.

Rust: Any can with rust should be properly inspected before eating. If the rust can wiped off with your finger, it’s okay to eat. However, if the rust is stuck on the can or on the inside of the can, it must not be eaten.

Swollen: Cans that are swollen, either because of reaching freezing temperatures or because of bacteria, should be discarded. The can will bulge when it’s contaminated with harmful bacteria.

Leaking: If a can is leaking, it has certainly been exposed to bacteria. Do not eat food from any can that shows signs of leaking. A dirty label could also mean that a leak is present.

Dented cans - can you buy them at a discount?

Some stores sell dented cans at a reduced cost. Usually there’s a clearance section where these items can be found. If you find a dented can at the regular price you might be able to get a discount, but that’s usually up to the manager…it doesn’t hurt to ask though!

The general rule is to never purchase a can that is leaking, has rust, deep dents, or is bulging.

Cans with deep dents are unsafe. A deep dent is obvious if the can has sharp points and / or if you can stick your finger in it. Deep dents and sharp points can cause a pin-hole size opening in the can which allows bacteria to enter and therefore makes it contaminated. Avoid cans that have deep dents near the side seams, top, and bottom of the can.

A can that has a small dent should be safe to eat, but inspect it anyway.

What does it mean if a can "hisses" when opened?

Hissing might just be the result of a can that has been sealed under pressure. You should have no problems with these kinds of cans, because that is perfectly normal. If the contents of the can explode out of the can when opened, however, this could be a sign of spoilage or botulism and must not be eaten.

What is botulism and what are the signs of it?

Botulism is a deadly toxin that thrives in the absence of oxygen. Sometimes, the food itself can carry this bacteria from the soil that it was grown in. If improperly canned, the bacteria will multiply inside the can. Other times, a crack in the can will cause air to enter, and the bacteria that it produces will contaminate the food.

Botulism is rare and is more commonly found in food that has been canned at home. In any case, it is deadly and shouldn’t be overlooked.

Signs of botulism include the following:

If any of these signs are present, DO NOT eat its contents and dispose of it properly.

* Fun yet sad fact: Botulinum Toxin Type A, more commonly known as Botox in the cosmetic industry, is made from the same bacteria that causes botulism.

How to safely dispose of canned food that has gone bad

Food that has gone bad may have toxic bacteria that could be deadly to humans and animals. To prevent anyone from accidentally getting into it, it’s best to throw it down the garbage disposal. If this is not possible, you can double bag it and dispose of it in a lidded garbage bin outside your home.

If you suspect botulism in the food after the can has been opened, you must properly clean the utensils and the area you opened it in. Clean up using a bleach-water solution made from mixing 2 cups of water with 1/4 cup of bleach. This will prevent further cross-contamination.

Can you refrigerate leftover food inside the opened can?

If you practice the following habits, your canned food storage should last you a long time.

When purchasing canned food at the store:

When storing food at home: